Look what I finally got from the library!

I was a little afraid to start Addie LaRue to be honest; it’s been hyped up so much that I was afraid to be disappointed.

However, I really enjoyed reading this book. Schwab’s writing is more poetic and lyrical than in other books I’ve read by her, and it sucked me into the story.

The Invisible Life of Addie LaRue follows, you guessed it, Addie LaRue. In France in 1714, Addie dreams of escaping her small village, but most of all, she’s desperate to avoid getting married. So she makes a deal with the devil. But the deal goes wrong, and not only is Addie now forgettable, she’s also immortal until she decides to give up her soul.

While I’m not usually a huge fan of non-linear stories, including Vicious by Schwab herself, I think it actually worked well in this book. We jump back and forth between present time (2014 in this case) and Addie’s past escapades. Overall, this book is a slow-moving character study of Addie, and I enjoyed learning about her unique life. I appreciated the emphasis on art, and loved the overall atmosphere of the story.

There were a couple of things that kept this from being a 5 star read for me, however. While I like slow-moving, character-driven stories, I just couldn’t get over the fact that this book is devoid of basically any plot for the first ¾. And this book is a whopping 442 pages long. Instead, we spend most of the time following Addie as she suffers on the streets of different cities, and focusing on all the different lovers she takes up.

There’s one sparse chapter about her being part of a war, which I feel like could’ve been a much more interesting part of Addie’s life, not to mention a much more interesting plot, yet we never see how it impacted her. Despite this being a highly character-driven story, I feel like Addie’s character never actually changes or evolves. And I guess that could be the point, couldn’t it? But not changing in 300 years?

It was also a little strange that Addie is alive for 300 years yet never makes it past Europe and the US. That, and the romance part of this book was subpar for me; the romantic interest was just not an interesting character to me. It didn’t help that the grandiose ending felt a little melodramatic.

Keep in mind that I can’t turn off the critical reader part of my brain. I guess getting your MFA and editing novels will do that to you! So even though there were parts of this book that I think could’ve been done differently, I still enjoyed the overall writing and the reading experience, and I think it’s worth a read. 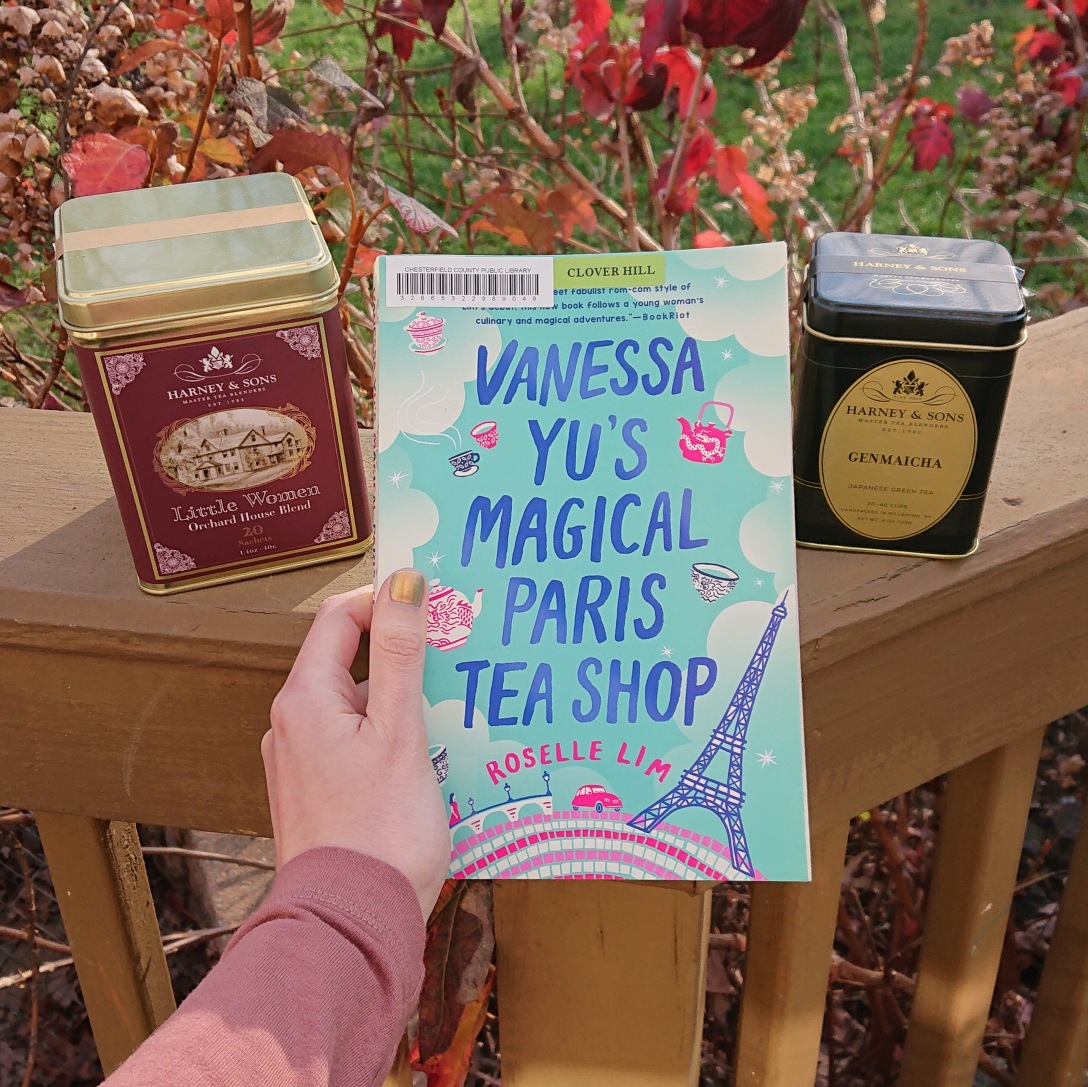 I hate giving a book 2 stars, but this one just wasn’t doing it for me.

I liked the overall idea, and I enjoyed the descriptions of the food.

However, the writing style was stiff and didn’t have any variety to it; it felt like every sentence was the same length. It was very much so “She said this. They did this.”

I found the dialogue and characters to be the same. The dialogue sounded very unnatural, and it didn’t help that all of the characters talked the same way. There was no subtext to the dialogue; it was all, “I’m sorry Auntie. I didn’t mean it.” “That’s okay. I still love you, Vanessa.”

Besides that, there was a lot of name dropping. There’s a scene in the Louvre where Vanessa and her love interest dissect every piece of art. Vanessa constantly talks about how fancy her aunt is, and name drops designers left and right. At times, it felt overly elitist.

The romance in the book was also pretty weird, including insta-love that just didn’t feel genuine to me.

And finally, whenever the background characters heard one of Vanessa’s predictions, they always accepted them as truth. I found this odd. I’d be very weirded out if I heard a prediction about my life come out of a stranger’s mouth, and I expected there to be more conflict from this.

I was hoping this book would be a nice, easy change of pace, but I just found it a little disappointing.

Grim Lovelies is my kind of fantasy: weird, dark, twisted, and magical, complete with (sort of) shapeshifting animals and a gothic feel.

Anouk is a beastie: an animal who was turned into a human by a witch. She and her fellow beasties are slaves for a powerful witch named Mada Vittora. But when Mada Vittora is murdered, Anouk and the other beasties must find a way to stay human before Vittora’s spell wears off.

I really enjoyed this book! It reminds me of a Frances Hardinge novel mixed with The Gilded Wolves by Roshani Chokshi. Shepherd’s writing flows well, and her dialogue shines on the page.

As with most books that I read, I loved the first half and liked the second half. I was worried that witches, spells, and goblins would feel too recycled, but I found the first half very original.

I liked the cast of characters, though I had a hard time visualizing some of them. Unless I missed it, Shepherd didn’t even write a full description of Beau until the end. My favorite character was Cricket, as she had the most stand-out personality.

I’m giving this book 5 stars because I thoroughly enjoyed it and thought it was done well, but like all books, it isn’t perfect. I really enjoyed Anouk’s character arc, and I loved her dynamic with the other characters. Shepherd also did a good job with worldbuilding and explaining the magic system.

I enjoyed how Shepherd weaved the Pretty world and technology with the magical world, and I liked the overarching theme of what it means to be human.

My only real critique is the way Shepherd handled the gay characters; their gender identity felt thrown in there just for the sake of it. I hope she handles the characters with more care in the sequel.

I also liked the ending, though I’m not sure I’ll like the sequel based on the description. I hope it proves me wrong!

I couldn’t help but compare The Gilded Wolves to Six of Crows by Leigh Bardugo. The heist plotline and the similarities in the gang of characters made it impossible. Prepare for a long review; I have a lot to say about this book!

The Gilded Wolves is packed with detailed information. The story is set in an alternative 1889 Paris in which certain people can Forge, or magically manipulate objects, metals, and/or plants, etc. I have to admit Paris is not one of my favorite cities, but I really enjoyed the setting for the book. Chokshi did a great job of exploring the city’s history, both the good and the bad, and I thought she described the city well. Her descriptions of the Eiffel Tower, mostly from Zofia’s point of view, were unique and interesting.

I enjoyed reading the snippets of Séverin’s past. Overall, Zofia was my favorite character because of her uniqueness. Plus, it was refreshing to read about a woman scientist and mathematician.

This book is an interesting mix of history, science, and mythology. I really enjoyed the mythology, as the book explored Greek, Roman, and Egyptian mythology. I loved the diversity of the characters; it painted a more accurate portrayal of Paris in 1889 and helped give the characters unique backgrounds and perspectives. I also enjoyed Chokshi’s descriptions and appreciated that she tackled themes of racism, prejudice, and identity.

Though the voices of the characters were each distinct, I only really started caring about Zofia and Enrique once I reached the halfway point of the book. They felt the most real to me. There was a death at the end of the book, and, unfortunately, I didn’t find myself caring about it as much as I wanted to.

I wasn’t really a fan of Hypnos. Though I appreciated the diversity his character brought, he felt like a stereotypical gay character to me, and I had a hard time understanding his motives and his character.

Though I loved the blend of topics, sometimes this book felt more sci-fi to me than historical fantasy. I also felt like the book wasn’t as deep as I wanted it to be. I almost wish Chokshi will write a prequel to this; a lot of events happened before the start of this book.

I have to mention that it took me a while to get into the story. The beginning was a little too chaotic, and I found myself having to re-read paragraphs to make sure I understood what was happening. The Order confused me. I also felt like the climax of the book was a bit rushed. Though I enjoyed Chokshi’s writing style, the overabundance of adverbs irritated me (that’s my English major coming out!) “‘You lied to me,’ she said loudly.” “‘Ready?’ she said brightly.” “‘I know,’ said Hypnos solemnly.”

Despite my issues with the book, I did enjoy reading it, so. . .