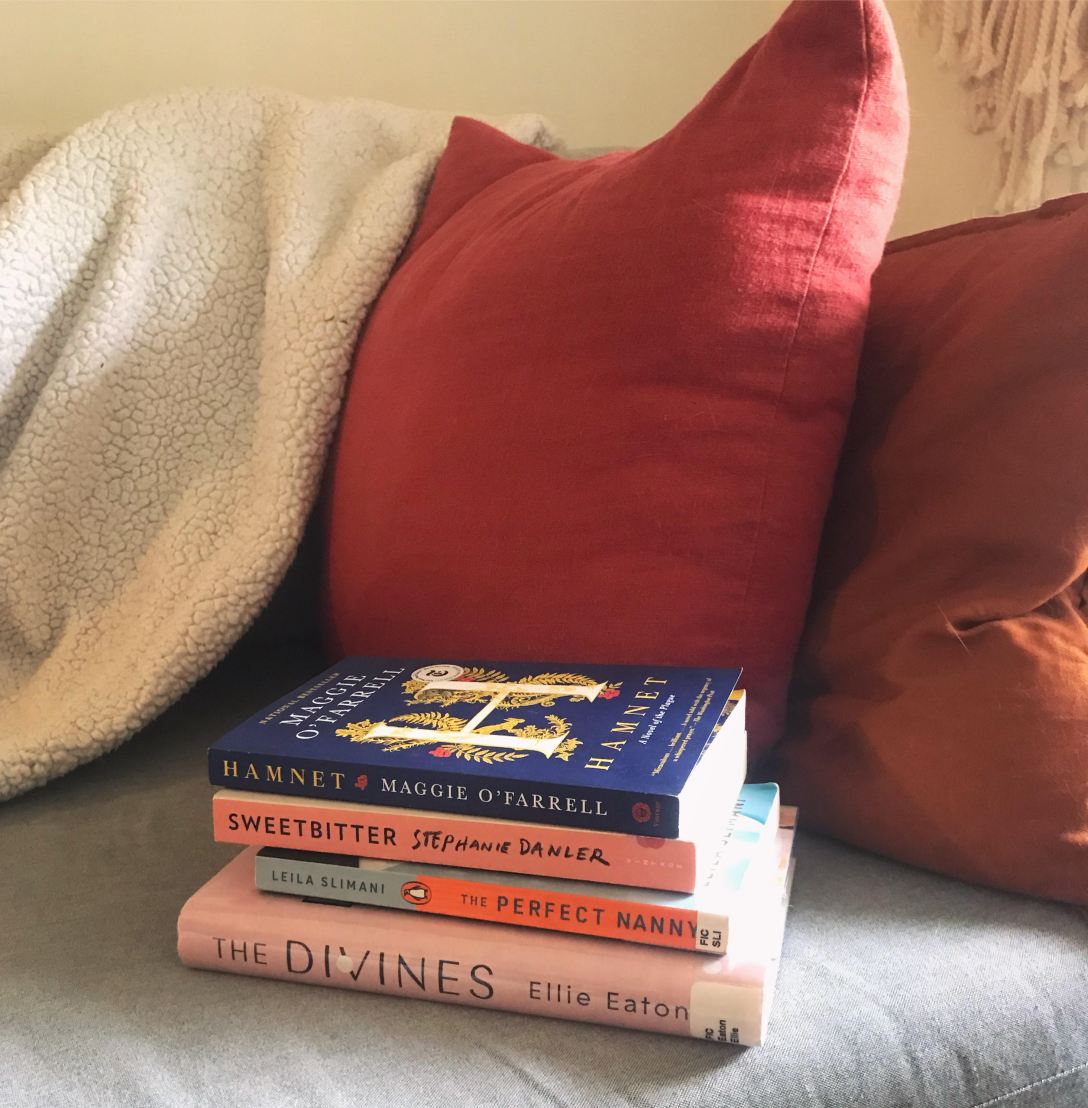 I didn’t read as much as I normally do this month, but that’s okay! I was busy going to the beach and filling my weekends with other end of summer experiences.

I finally read Hamnet this month, and loved it as much as everyone else did! It’s a lyrical written story about grief and Shakespeare’s (fictionalized) family. This is exactly what I’m looking for in literary fiction- beautiful writing and expertly written characters. Maggie O’Farrell clearly did her research on the Shakespeare family, but she also tells an original story that stands on its own. Hamnet is also the first book that made me cry in years.

I liked the descriptions of food and NYC in Sweetbitter, but overall it was too slow & way overwritten. My favorite thing about this book is what I learned about working in the restaurant/food industry, specifically fine dining. If you can get through Tess’s overly naive and heady descriptions of her life after randomly moving to New York City, you’ll learn about the inner-workings  and politics of running a famous restaurant. Seriously, this girl doesn’t know anything about New York City (or life) when she gets there. Yet somehow she’s likable, sexy, and a protegee at her job? What saved this book for me, as someone who lived there for a year and worked in two unforgiving industries (publishing & retail), is the love/hate descriptions of working your butt off living in New York City.

The Perfect Nanny was the most underwhelming thriller I’ve read all year. Translated from French, this book has a lot of half-baked ideas and proclamations about motherhood, race, and class. All these ideas and themes were underdeveloped.

But the biggest problem I had with The Perfect Nanny is that it’s a thriller, and yet there was no surprise or twist. At the very beginning of the book, we learn that a French couple’s nanny, Louise, has killed their two children. Spoiler alert, she did. And there’s no nuance to why she did it. I also didn’t find Louise’s character very believable. There’s not nearly enough to justify her mental breakdown at the end.

I love a good campus novel with a mystery and vapid teenage girls, and The Divines didn’t disappoint. This one has surprisingly low/poor reviews on Goodreads. Maybe people don’t like it because it’s slow-paced and the characters are extremely dislikable. Although that description also fits the much-loved The Secret History by Donna Tartt French, and I thought The Divines was better. What I really liked about this book was how the reader learns about Joe’s experiences and trauma at boarding school affected her adult life. This book also takes an interesting look at how memories can change over years and how people remember the same events differently.

I also read Moonflower Murders (not pictured), the second book in the Susan Ryeland series by Anthony Horowitz, which was just as good as the first! I don’t want to spoil anything from book one, Magpie Murders, but these books have some of the most masterful plotting I’ve ever read. They’re also both murder mysteries within a muder mystery. I really hope there will be a book three!

With August ending, I can’t wait to officially kick off my fall reading in September!

Well, my laptop stopped charging, and I had to wait to get a new charging port. It’s hard updating a blog without my laptop! Thankfully, it’s all fixed now, so time for another book review!

Lost in the Never Woods is a modern day Peter Pan retelling that takes places when Wendy turns eighteen years old. A string of child disappearances all keep coming back to her, only reminding her of when her own two little brothers disappeared years ago without a trace. And then Peter Pan shows up in Wendy’s town.

I enjoyed Thomas’ writing style in Cemetery Boys, and I likewise enjoyed it in this one. It was spookier and less lighthearted than Cemetery Boys, while keeping the heartwarming magic of Peter Pan.

The basic plot reminded me of the middle grade series Peter and the Starcatchers, which I read when I was younger, so I think if you enjoyed that series, you’ll like this book. I liked the themes of childhood and trauma that Thomas explores; this book focuses a lot more on Wendy’s trauma and emotions than plot. I’m also always a sucker for a book featuring spooky woods.

My one main critique is that the final plot reveal at the end wasn’t my favorite. Also, the characters weren’t as well-rounded as I would have liked. There’s a smaller spoilery critique that I’ll include down below. But overall, I enjoyed this one.

Okay, so Peter Pan romance, right? I don’t have a problem with that except, well, Peter is a child. He goes through a weird growth spurt in this book and ends up being physically around Wendy’s age by the end, but mentally, I believe he was still around 13? I don’t know, it was a little weird having them have a romance at the end when Peter just ends up going back to being a child. As much as I love romance, I almost wish this book had focused more on friendship rather than a really slow burn romance. 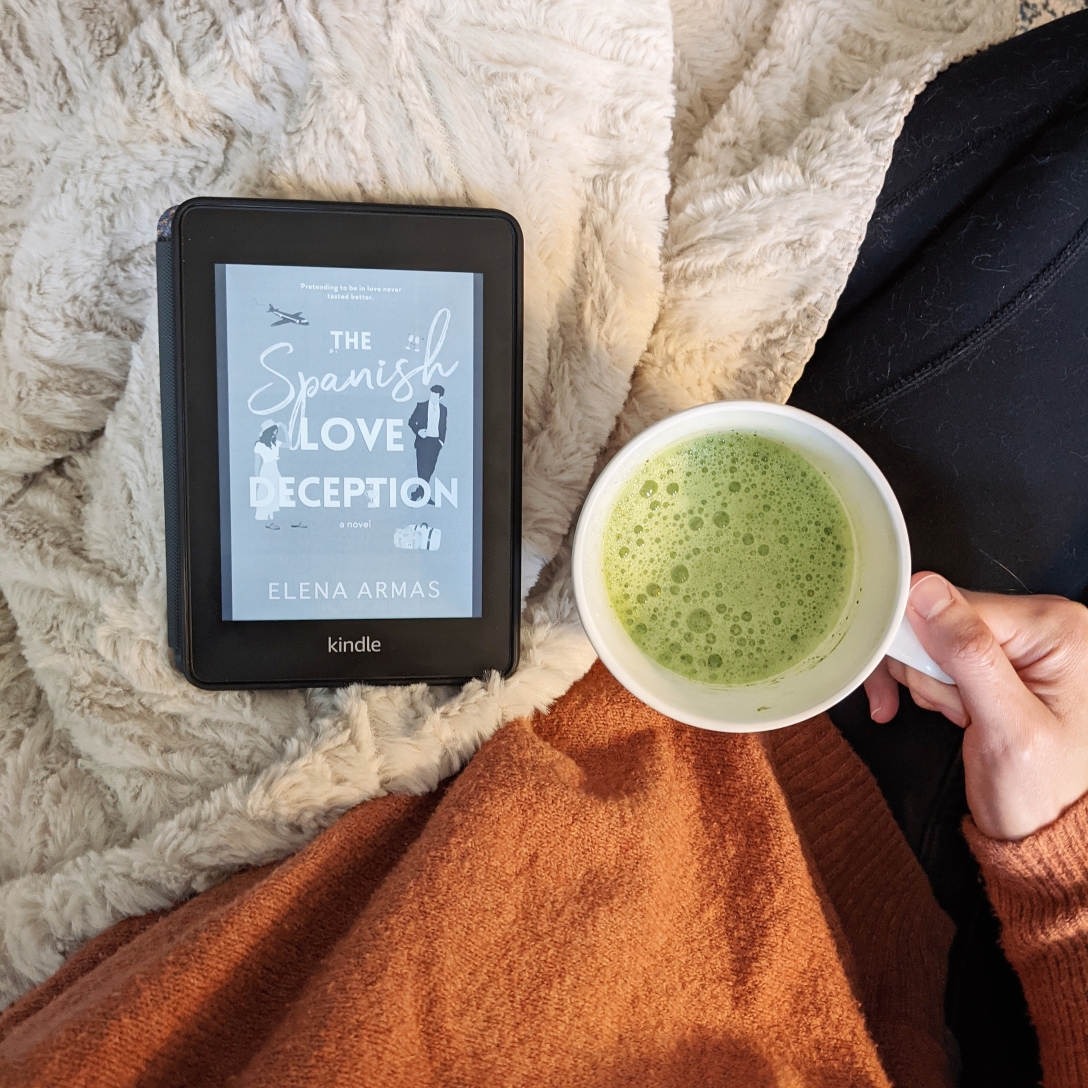 I don’t usually read romance books, but I’ve had so much intense reading for class lately that I needed a fun book to read as a distraction!

The Spanish Love Deception follows Catalina, a Spanish woman living in NYC. Her sister is getting married back home in Spain, and Lina promised to bring her boyfriend as her date to the wedding. The only problem: she doesn’t have a boyfriend. But her coworker, Aaron, convinces her to take him along, and pretend to be her boyfriend.

The dialogue was fun, snappy, and playful. Lina and Aaron are foils to each other in many ways; Lina is loud and talkative, and Aaron is serious and quiet. Their relationship is fun to read about, and I enjoyed the dynamic between them, as well as Lina’s dynamic with her family.

The romance takes a while to happen (definitely a slow burn) but it was written well (it does get steamy!)

The book went on a little long. I definitely think 100-200 pages could’ve easily been condensed or cut out. Because of this, the writing, including Lina’s internal narrative, often feels repetitive. We see Aaron’s description literally every chapter; I got a little tired of reading about his blue/ocean eyes and huge/bulky physique.

That being said, if you’re looking for a fun romance, specifically enemies to lovers, an office romance, and the fake dating trope, consider picking this one up.

Between continuing to distance from others and the wintery weather, my reading was a major comfort and escape this month. I’m also happy with the diverse genres and authors I was able to read this month. I read two nonfiction books (one memoir and one cookbook), and two books by Indigenous authors, both of which work in favor of my 2021 reading goals. Here’s what I read:

The Woman in White: Started off the year with an atmospheric, satisfying classic mystery.

Elatsoe: Spooky magical YA by an Indigenious author. My only criticism is that this read VERY young to me.

Moon of the Crusted Snow: actually a literary dystopian as promised (unlike Migrations) Written by an Indigenous author.

Migrations: The low point of my reading month. Do not recommend this one. Read my review.

After the Eclipse: A Mother’s Murder, a Daughter’s Search (audiobook; not pictured); A heartbreaking memoir about the author’s mother’s murder. Also a criticism of the explorative nature of true crime as a genre.

Anna: I so badly wanted to love this! I love New York City and I lived there for a year, so I want to make a disclaimer that this wasn’t an issue of me not understanding NYC. I also think N.K. Jemisin is a talented author and I enjoyed The Fifth Season.

This is a unique and creative fantasy novel, but not without some thoroughly confusing world building. While I enjoyed the setting and the diverse cast of characters, I couldn’t shake the feeling of being hit over the head with thinly-veiled symbolism throughout. With little room for interpretation and imagination, I’m not sure if I’ll pick up the next book in this series.